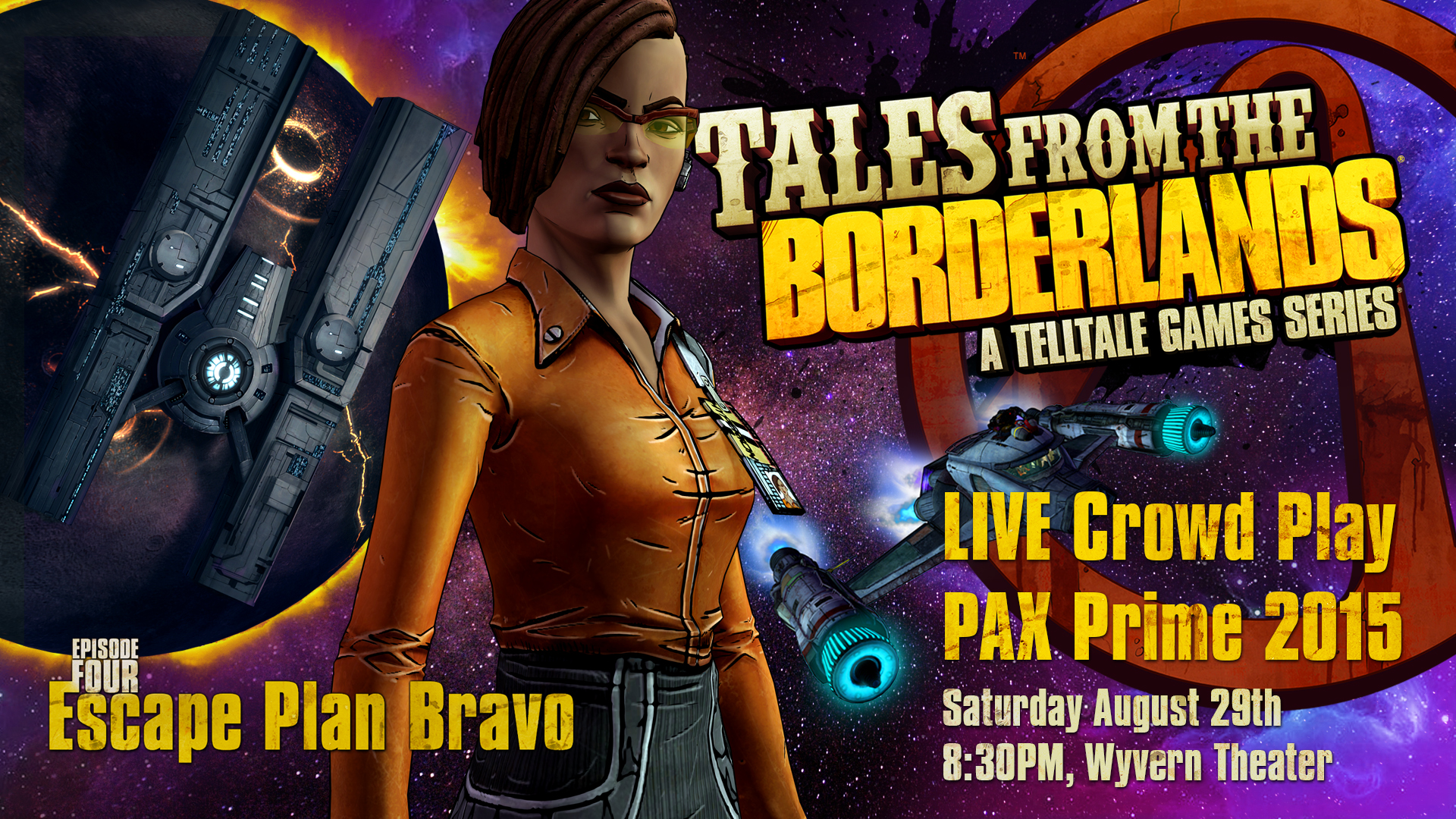 Calling all Borderlands fans at PAX Prime! Join Tales from the Borderlands: A Telltale Games Series devs and cast for a special “Crowd Play” event on Saturday, August 29th at 8:30pm, where we’ll be playing Episode 4: ‘Escape Plan Bravo’ LIVE on a theater-style setup fit for Handsome Jack himself. We’ll need all 500 audience members to help us steer the decisions in this penultimate episode of the season, so come equipped with your shouty voice and ready to participate in an evening that should be loads of fun (and probably just a little bit ridiculous). Cosplay is welcomed, and fair warning: there will be giveaways! Look for Episode 4 screenshots, trailer, and release dates in the near future, and stay tuned in the coming weeks for more info about Telltale’s happenings at PAX Prime.

Set on the unforgiving world of Pandora after the events seen in Borderlands 2, Tales from the Borderlands is a five part episodic game series full of Borderlands’ trademark humor following two adventurers on their quest for greatness. GamesBeat awarded the season premiere of Tales from the Borderlands a 96/100 score, calling it, “A hilarious knockout,” adding, “Zer0 Sum stands tall as the ultimate point-and-click science project: combine the beloved Borderlands lore and setting with the shining vision of an artistic studio, crank up the heat, and enjoy.” GameSpot awarded the episode a 9 out of 10 score, calling the episode, “…a beautiful new twist on the Borderlands experience with loveable leads and breathless action sequences.” Destructoid also awarded the game a 9 out of 10 score, saying, “Telltale really knocked it out of the park with this one,” later adding, “…this might be the funniest Borderlands game to date.”

In their review of Episode 2, Polygon praised writing that “crackles with the sort of life and energy that drives the best comedy,” while IGN said “it constantly oscillates between thrilling action scenes, hilarious back-and-forth banter, and some poignant character moments… I consider myself completely on board for Telltale’s wild ride.” Entertainment Weekly also declared the season so far as one of their favorite games of 2015, saying, “do not miss one of year’s most engaging and hilarious rides.”

Tales from the Borderlands: A Telltale Games Series – Episode 4: ‘Escape Plan Bravo’ is rated ‘M’ (Mature) for Blood, Strong Language, and Violence by the ESRB. The series is published digitally by Telltale Games in partnership with Gearbox Software and 2K.