Tales of the Neon Sea is a cyberpunk pixel art point-and-click detective adventure set in an indeterminate point in the future where skyscrapers and neon lights draw impressive aesthetics all throughout the cityscape. In a world in which humans and robots contend with escalating tensions and mutual distrust, you will have to harshly explore each neighbourhood in town and unveil the whole plot through intriguing dialogues with the characters you meet up with.

“The setting in Tales of the Neon Sea is inspired in sci-fi movie classics such as Blade Runner ”, says Xuan Li, co-founder at Zodiac Interactive. “Old-school point-and-click fans will be delighted with its pixelated visual style and its electro soundtrack which perfectly suit the steampunk universe involving this game”.

Tales of the Neon Sea is the first game made by Palm Pioneer appearing on PC. The game will also be launched on consoles after the Kickstarter campaign reaches the goals. Specific platforms and definitive release dates will be announced in the near future. 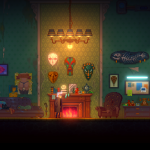